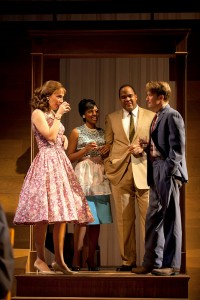 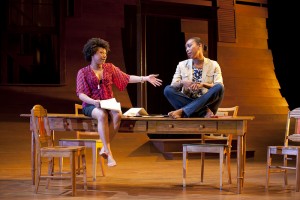 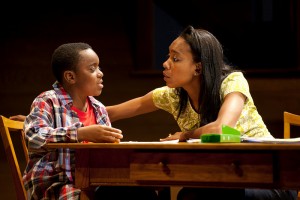 The Luck of the Irish by Kirsten Greenidge
Huntington Theatre Company

“It’s one of numerous instances in Greenidge’s superb, beautifully realized new play —now receiving its premiere in a Huntington Theatre Company production directed by Melia Bensussen — that illustrate the playwright’s sure grasp of the nuances of race and class and her insights into the complexities of human nature.”
Read the review…

“Obie Award-winning director Melia Bensussen finds both the drama and the humor inherent in the situation and guides a flawless cast to capture the humanity in Greenidge’s characters while evoking a strong sense of place.”
Read the review…

“On rare ocassions, a play is greater than the sum of its various parts. This is true of The Luck of the Irish by By Kirsten Greenidge. The parts are great. The play is magnificent.
This production is smoothly directed in a social and chronological choreography. This Huntington drama is directed by Melia Bensussen.”
Read the Review…

“(BOSTON) – The Huntington Theatre Company’s production of Huntington Playwriting Fellow Kirsten Greenidge’s The Luck of the Irish closed yesterday as the highest grossing and attended Huntington world premiere at the Calderwood Pavilion at the BCA since the fall of 2004. The Luck of the Irish played for a total of 41 performances from March 29 through May 6, including a one-week extension due to popular demand that was announced on April 13. Ticket demand for The Luck of the Irish was so high that an advanced waiting list was introduced in April and final extension performances were sold out.
The production, which was directed by Obie Award winner Melia Bensussen, received universal critical acclaim:”