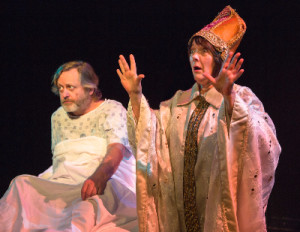 Terry Byrne Boston Globe  March 10, 2015
Once again, Sleeping Weazel presents some of the most unexpected and entertaining evenings of theater in town. “Badass,” a trio of poetry and plays, running at the Boston Playwrights’ Theatre through March 14, brings together an eclectic group of women artist-performers — Magdalena Gomez, Kate Snodgrass, and Robbie McCauley — for new works that lift the spirit and touch the heart.

The three pieces aren’t built around a common theme — “Badass” covers a lot of territory — but they share the notion of identity and the ways we, and others, attach labels that are limiting and misleading.

Gomez opens the evening with a solo presentation of “Shameless to the Bone!,” a series of poems that manage to weave in a variety of cultures and characters. Although she delivers her poetry from behind a music stand, her facial expressions are extraordinarily elastic and her command of a variety of accents and idioms adds another level of passion to her words. Gomez’s strident calls for justice are leavened by hilarious bits of humorous defiance.
The climax of her poems comes with an embrace of a series of insulting names she delightfully “disem-vowels,” to remove their sting.

“The Tempest (or Bark’s Dream)” is a play that opens with actor Steven Barkhimer (Bark) in a hospital bed. He speaks poetically about the dream he had when he died in a medical emergency, while Kate Snodgrass hovers over him in the guise of a religious icon. But as Bark struggles with the play’s stretch to connect his story to Prospero in “The Tempest,” the play explodes into a conversation between Bark and Snodgrass about love, loss, death, and truth.
This may sound a little twee, but in the hands of longtime teacher and playwright Snodgrass, it shifts almost effortlessly from hilarious to heartbreaking, with more than a few surprises along the way.
(Directed by Melia Bensussen)

The third piece, “Jazz ’n Class” is a tour de force solo performance by actress-playwright and teacher Robbie McCauley. Structured as a kind of memoir-conversation, “Jazz ’n Class” traces McCauley’s place in her life and love of her daughter through her relationship with music. McCauley doesn’t just tell a story, though. Her body becomes a series of musical notes: A shift of her hips, a flip of her hand, a turn of her fingers all sound notes of joy and rage. We feel the richness and depth of McCauley’s connection to music and black culture in every word, move, pause, breath, creating a hypnotic rhythm section she says is “both remembered and improvised.”
As she reconciles her own memories and the soundtrack of her life with the different choices her daughter has made, a final image projected on the wall becomes a breathtaking opportunity for her to step through the divide between jazz and classical music and find the place where they connect.

“Badass” is a refreshing evening of exciting new work.